For our next event we are delighted to welcome Bradford-based band Gurgles as hosts for the evening. They will be choosing the records they love and that have influenced their own, unique sound. We’re also hoping that the band will join us for our March edition of the Record Club radio show on BCB Radio. 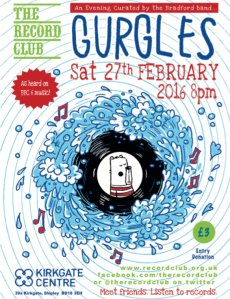 Gurgles describe themselves as “Bradfordprogpop” and features Gus Bousfield (also of Mucky Sailor, ex of Nope and the writer of a myriad of music for tv and radio), Nanette Brimble and Bradley Cunningham…

After releasing a few limited issue 7″s, downloads and even a cassette (it’ll never catch on, guys) their debut album Gurglefirst? was launched last summer. With influences ranging from Kraftwerk to Prefab Sprout to High Llamas and Steely Dan, the album was met with a blaze of ecstatic reviews…

“I absolutely love it, you are going to hear a lot more of this lot. A brilliant album that I’m really enjoying. Reminds me of everything from Seventh Wave to Prefab Sprout and Emerson Lake and Palmer.” Stuart Maconie, BBC 6Music

“Gurgles construct multi-coloured song-structures soaked in psychedelic flavours. At the heart of both songs here are muscular pop melodies that combine with an almost Steely Dan-esque proficiency” Rough Trade

“Gurgles still aren’t afraid to swirl their myriad influences together in odd and sometimes incongruous ways to produce something that’s quite a headtrip. If progressive pop doesn’t yet exist as a concept, then Gurgles will surely be hailed at some point in the future as its exemplars. Twittery analogue synths float around shimmering pop harmonies, and there are some insistent grooves too” Whisperin’ and Hollerin’

“…the power of prog, the drama of opera and the AOR grooves of the 70’s and turns them on their head with a kind of left of field madness that Zappa would be proud of…Add to that poetic moments ala Terry Durham and free-jazz ala Nice…Well this is a bit special!” Jumbo Records

“These songs are clever – that is musically clever and lyrically clever – and make from their influences some poppy melodies driven by some frankly wonderful keyboard playing. This stuff is groovy” Local Sound Focus

“Fantastic band… Quite sort of just… out there, really… It all fits together, it’s all really clever. And quite poetic as well… I really recommend this. Almost like a supergroup of musicians… It’s like the furtive imagination of years of being in bands doing out-there things. And if this is the result then I’m really impressed.”  Yorkshire Post Music Blog

For any residents of Shipley and Bradford, the cover’s pretty special too!

Having experienced one of Gus’ DJ sets in Saltaire last summer I think we’re in for a really special night. Plus I know Nanette is a big Scritti Politti fan, so everything will be fine!

Join us on 27th February at the Kirkgate Centre from 8pm. £3 on the door to cover our costs. There’s an excellent cash and card bar and we’ll no doubt find some of Bradford’s finest pakoras to serve on the night.